​(Click on the thumbnails below to view photos in our gallery) 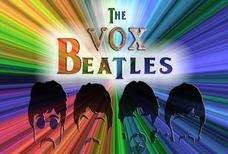 ​THE VOX BEATLES  are a highly recommended Beatles Tribute Group and have had the pleasure of performing at numerous prestigious events including The Roundhouse in Camden, the QE2 in Dubai, Shakespeare's Globe in London and the British Embassy in Kuwait.  A highlight was also playing at the Grosvenor Ballroom in Wallasey where the Beatles actually performed there a few times themselves.

No matter how big or small your event is, The Vox Beatles will

put on a show to remember and leave you wanting more.  It's not about

just playing the songs, it's about the passion for all things Beatles and appreciating those four young lads from Liverpool John, Paul, Ringo & George who spread their magic all over the world and their legacy still continues today.

been asked to perform at.